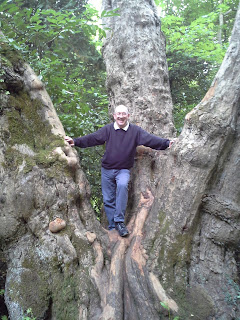 Our Irish tale really began in Essex, England, in late 2003, with eleven words spoken to me by my doctor; they were, “Carry on like this and you’ll be dead in six months!” The unrelenting pressure of work, combined with the looming prospect of redundancy and the associated fear of financial catastrophe, had taken its toll on my health. I wasn’t as sick as a dog, but – to extend the analogy – this dog hadn’t felt like wagging his tail for a while. To be fair, the health thing was more of a warning than a disaster; in a way, it was a blessing, because it provided the incentive that my wife Lesley and I needed to change our lifestyle radically.

We were an outwardly happy couple; for more than 25-years I had successfully avoided Lesley’s affectionate attempts to kill me. Consequently, we were the proud parents of a grown-up daughter, who had her own house and a successful career doing something clever in the city. We also had two dogs; both were pretty Lhasa Apsos, but they didn’t have jobs, or a house of their own – so they lived with us, rent-free.

Lesley and I had a nice house in a popular North Essex village not far from the border with Suffolk. It was a quiet spot, if you ignored the constant rush of cars speeding through the village, slowed only by a single set of traffic lights and the heavy trucks lumbering to and from the nearby port of Harwich. We had a large garden, with several old fruit trees and a magnificent vegetable plot – a living and edible testament to Lesley’s gardening skills. On the rare days that we had some free time, we would go shopping in Colchester, where we could buy things that we didn’t need, with money we didn’t have. Alternatively, we might walk our two dogs in Wivenhoe woods, or take the short drive north to Dedham, where we would stand shoulder-to-shoulder with thousands of other people seeking the same solitude and the views immortalised by the English landscape artist John Constable. We should have been content with our lives, but somehow we weren’t; there was a vague hunger chewing at our insides, like the dull ache of a love once lost.

Perhaps people with proper jobs, professional people like doctors and teachers, have their lives planned out from university to retirement – but it seems to me that the rest of us sail across the lake of life in a more serpentine fashion. Rudderless, we are pushed or pulled by the winds of fortune, from one life-stage to another, until we eventually wash up exhausted upon the golden sands of blissful retirement. I had an interesting and well-paid job, with regular holidays, free medical insurance, a posh company car, and the prospect of retiring with a decent pension at the age of 60 – if I lived that long and survived the regular culls of corporate resizing. It was a good career and one that suited my skills, but it wasn’t what I chose to do with my life; it was just something into which I had fallen.

We weren’t rich, but we had only to feed our beloved dogs, four chickens, a hungry mortgage, and a few overweight credit cards, before we could count our loose change and perhaps order a takeaway meal. Our lives may well have been much worse, so we should have been happy, but like many people of our age, ‘empty nesters’ in the third quarter of life, suddenly free from the responsibility of parenthood and bored with the empty rewards of career and consumerism, we yearned for something different – a simpler, quieter life. 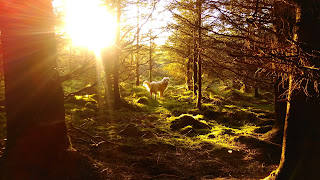 After my doctor delivered his stern warning, it became a catalyst for us to make a plan and take some truly decisive action. The next day I quit my job, and then in just a few hectic weeks we sold our house and invested every cent we had into buying a dilapidated 200-year old farmhouse in beautiful County Clare, in the rural west of Ireland – a Country we had never before visited.

I think that one of the best things about what we did was that it gave us an opportunity to re-invent ourselves. Had Lesley and I remained in Britain, it would have been almost impossible to downsize our spending, or change careers. Conversely, relocating to another country, particularly if (for a while) you no longer need to earn a living, gives you the freedom to become anything you want. Before the move, we were rudderless; now we had the opportunity to make a plan and have a vision of how life should be, and then stride out confidently along that path. As a good friend once said, “It’s never too late to be who you could have been.”

Lesley and I both had a desire to be more creative; we wanted space and freedom, and something to give our rudderless lives some direction. We had also committed to stepping out from under the burden of debt that seems to have become commonplace in polite society. That meant that we had to live within a budget and learn again to ‘make-do and mend’. All of that figured large in the process of choosing our new home. Lesley didn’t want yet another small garden, she wanted to own land for cultivation; she wanted acres of space, with meadows of wild flowers, woodland for firewood, and orchards with succulent fruit for making jams and sweet pickles. I wanted space and time. Space to grow and time to write; I wanted to keep chickens and ducks, and I had a desire to use my hands to build things and make things better.

Somewhere inside my head, there was an image of how life would be, like an idyllic scene from a romantic film…
The curtains pull back as the lights dim and waves of classical violin music rise and then fade as the camera picks out a lone figure on a hilltop in rural Ireland. I’m standing at the highest point of my land, shirtless and statuesque. As the setting sun shines its warming rays onto the well-defined muscles of my slab-like chest, a soft breeze lightly ruffles my thick dark hair. At the bottom of the hill, you can see the house, and as the camera zooms into soft focus, we see my loving wife, tending to the garden. She looks up from digging in the soft dry earth and waves, happy and smiling. I wave back, and then give a quiet whistle, softly calling my faithful dogs to sit obediently at my side. Slowly, I turn my face towards the warmth of the setting sun and smile, confident that life is good, we are wealthy, and I am the master of all I survey.

Almost twelve years later, and the reality is, perhaps, a little less romantic. To start with, my chest is more like a barrel than a muscular slab, and I’m probably squelching through the mud in search of my unruly dogs while the howling wind whips freezing raindrops, like steel pellets, across my shiny, bald, head. Beneath our feet, the soil has proven to be so thin and stony that it was best attacked with a pickaxe and a pry-bar, and then enriched with lorry loads of fertilizer and manure. It’s November, and unseasonably warm. After a welcome late summer dry spell, the winter storms have arrived, lashing the west coast with ten consecutive days of unrelenting wind and rain. In the valley below, the farmers are fighting to protect their livestock and winter feed, from the rising flood waters.

Our home, ‘Glenmadrie’, is looking passably nice, although a little mouldy in places. Using only an instruction manual to supplement our limited DIY skills, and by injecting a large proportion of our savings, the previously dilapidated farmhouse has been transformed into a cosy family home. The garden, once a wilderness of rough grass, rubble, and discarded rubbish, now has structure, mature shrubs, flowerbeds and a large vegetable plot alongside a 50-foot polytunnel. The meadow is no longer overgrown with wild rushes and puddled to mud by cattle; with regular cutting, the grass has become lush and healthy, and in time, the dozens of oak, ash and birch trees that we have planted, will grow to add shelter and colour.

So my image from the romantic film has not been replaced by some disaster movie, but periodically it does seem to resemble the worst sort of reality television. Forgive me if I sound a little sullen, I’m definitely not. We have a wonderful life here in Ireland, and it is in my nature to find humour in everything I see. Sure, it rains – sometimes a lot, but putting up with the weather is what makes us appreciate the sunny days all the more. On those rare days that the sun chases away the clouds, there is nowhere more beautiful than rural Ireland, and its forty shades of green. 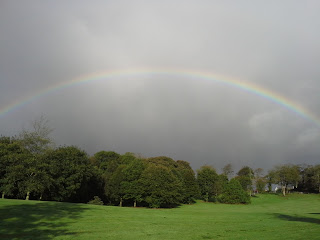